Breaking down POTUS’ week-long saga as he battles Coronavirus

News broke last Thursday that President Trump and First Lady Melania had both tested positive for COVID-19. Since then, the media has been flooded with questions, concern and breaking news regarding Trump’s health. Here’s a breakdown of what has happened in the past week:

Developments regarding the President’s health and the health of those who surround him continue to progress.

Throughout October the Medill School of Journalism, Media and Integrated Marketing Communications at Northwestern University is offering free high school student and advisor programming related to journalism production, called “High School Journalism Live.” This is the first year the program is being held.

Unlike other programs, “High School Journalism Live” tools are available to parents, too. The program is aimed at offering applicable tools to high school journalism students and advisors, but also giving interested parties a front row look at a professional career in journalism. The program includes both workshops and panel discussions led by Medill faculty and students over Zoom.

Here are the programs you can still register for:

For more information regarding “High School Journalism Live” and Medill, make sure to check out their website. 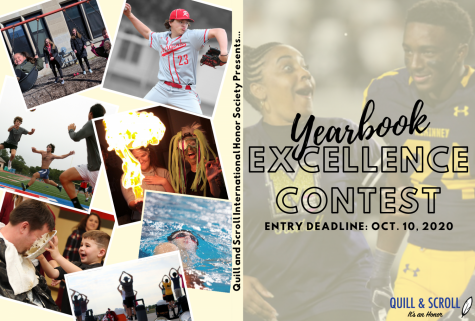 With just one day left to submit to the Yearbook Excellence Contest, make sure your students’ work is represented.

It’s never too late (or early!) to honor seniors and induct members

‘The Number One Lesson in Covering Politics’

Tennessee officials accidentally listed 13 pallets of COVID-19 testing swabs for auction after mistakenly labeling the pallets as surplus supplies last week. The Tennessean approached officials regarding the listing of materials on GovDeals.com, a government surplus auction site. Officials removed the listing Thursday after receiving a singular bid of $150.

Have you ever heard of GovDeals.com? Well, let me introduce you to the site that sells surplus assets for local and state governments. A liquidity services site, GovDeals.com provides a hub for states to list surplus materials that they no longer need in auction format. Each item has a starting bid and auction expiration date. GovDeals.com has pretty much any item you may need. How about a new luggage set? GovDeals.com currently has 14 different bags listed. Motorcycles? GovDeals.com has 12.

Kellyanne Conway served as President Trump’s campaign manager during the 2016 election cycle, and then moved on to serve as one of his counselors until the end of August 2020. Most circles are aware of Conway; her position in the media as one of President Trump’s closest advisors led to an abundance of media coverage. When she announced that she would be stepping down from her position – and transitioning away from the White House – in August, Conway cited family reasons as her grounds for her departure.

So, how does this relate to teenagers? Simple – Claudia Conway, 15-year-old daughter of K. and G. Conway has become a widely recognized figure throughout social media for her consistent criticism of President Trump, discussions of her mother’s position within the White House and its affect on their family and discussion of the impact political dispute throughout her household has had on her mental health. C. Conway’s has over 1.3 million followers on TikTok and 580 thousand followers on Twitter – including the application’s CEO.

C. Conway, who was trending on Twitter earlier this week, has been called the “whistleblower” of Generation Z. A frequent TikTok user, C. Conway consistently posts videos speaking against President Trump and her mother’s actions with him. However, others argue that C. Conway’s social media usage should not be viewed as a political spokesperson for teenagers, but rather as an inside look at the teen’s family troubles.

C. Conway expressed frustration for her rising status on social media via TikTok. Her presence in popular media is a combination of her mother’s status within the White House and her blatant disapproval of her mother and father’s political views. You may continue to hear C. Conway’s name throughout the news because of her believed “inside look” at President Trump’s politics. However, C. Conway makes it known that the information present on her social media accounts are her own opinions.

No matter how you view C. Conway, there are a few things we can learn from her as an active contributor to political discussions:

Since the creation of the Nobel Prize in 1901, the award has only been given to women 23 times in medicine, physics or chemistry: the three categories attributed to science. In comparison, prizes have been given 599 times to men in the same categories.

The chemistry prize was given to Emmanuelle Charpentier and Jennifer Doudna for their work developing the CRISPR method of genome editing.

Pretty fly for a debate guy

He was trying to make a point about the Trump-Pence tickets support for law enforcement officers, but the audience during Wednesday’s vice presidential debate just couldn’t get past that small, black spot on Vice President Mike Pence’s head.

Here’s the two-minute segment that caused such a buzz:

Soon after, a Twitter account called @MikePencesFly garnered 70 followers. More serious social media reported how much the fly perked up an otherwise tame discussion of the issues facing the U.S.

Republican political commentator David Frum, a speechwriter for former President George W. Bush, called the fly on Pence’s head the perfect analogy for the past four years in his commentary for the Atlantic magazine.