The first presidential debate, taxes and all that other stuff

Should there even be more presidential debates? That’s the raging question after Tuesday’s initial confrontation between President Donald Trump and former Vice President Joe Biden. Here’s what several opinion writers have to say about that:

Meanwhile, Amazon removed merchandise sold by a white supremacist group from its site after the group calling themselves “Proud Boys” took President Trump’s words to them — “Stand back and stand by” — as a call to arms.

Taxes? We don’t need (to pay) no stinkin’ taxes!

The New York Times released findings from a large investigative report into President Trump’s taxes Sunday. Needless to say, the findings are pretty dense, resulting in an interactive web page filled with information from Times’ journalists.

The major article opened with a shocking number, “Donald J. Trump paid $750 in federal income taxes the year he won the presidency. In his first year in the White House, he paid another $750. Had had paid no income taxes at all in 10 of the previous 15 years — largely because he reported losing much more money than he made,” said journalists Russ Buettner, Susanne Craig and Mike McIntire.

Social media and privately-owned merchandise companies jumped on this number fast; check out this commemorative T-Shirt you can purchase to remember that you, or your parents, probably, paid more taxes than the President of the United States.

Now that we’ve gotten over the initial shock and had a good laugh (thank you, TikTok), let’s look at some key points The New York Times thinks you should know. Quill and Scroll has selected a few from that list:

It’s no secret that there’s been A LOT of controversy over the number of mail-in ballots that are expected to go out during this election period because of health concerns brought by COVID-19. Even so, across the nation in-person registration deadlines are scattered. Many in-person registration dates are similar to mail-in and online registration, but make sure to check your state’s voter registration website for specific dates for all types of registration.

Here is a list of in-person registration deadlines provided by Journalist’s Resource:

How to find reliable sources regarding elections for first-time voters

The Poynter Institute launched MediaWise in 2018 to encourage media viewers of all ages to be critical regarding the content the consume online. Their MediaWise Voter Project focuses on giving first-time voters reliable and accurate information regarding the 2020 election.

Their content is geared toward soon-to-be- voters – that’s you! – and preparing them with necessary and helpful tools that will help them feel informed and prepared to vote come November.

Here are some of the programs they offer for free:

Make sure you use the hashtag #MVP when you engage with MediaWise’s content! Check out their introduction video below.

With just one day left to submit to the Yearbook Excellence Contest, make sure your students’ work is represented.

It’s never too late (or early!) to honor seniors and induct members

Amy Coney Barrett – what you need to know

The veil of anticipation broke Saturday after President Trump officially announced 7th US Circuit Court of Appeals Judge Amy Coney Barrett as his nomination to fill the seat left by Ruth Bader Ginsburg on the US Supreme Court. Judge Barrett was appointed as an Appeals judge in 2017; prior she served as a law professor at the University of Notre Dame as well as as a clerk for Supreme Court Justice Antonin Scalia.

While Barrett’s nomination comes with controversy, a Rasmussen Report poll states that 79% of voters believe Barrett will receive Senate confirmation – which would appoint her as the ninth judge of the US Supreme Court.

In Barrett’s short-lived time as a judge in the 7th US Circuit Court of Appeals, she demonstrated her republican ideals and originalism focused interpretation of the US Constitution. Barrett’s nomination received a fair amount of backlash because of her political and Catholic beliefs and her potential appointment in timing with Ginsburg’s death.

Sunday’s Browns vs. Washington NFL game made history for being the first full in-season game to include a female coach for each team and a female official. The Browns’ Chief of Staff Callie Brownson, Washington’s full-year coaching intern Jennifer King and Down Judge Sarah Thomas are all prominent women in football that have contributed to including women in the sport.

Your guide to the spooky, funny and attention grabbing movies and tv series of October 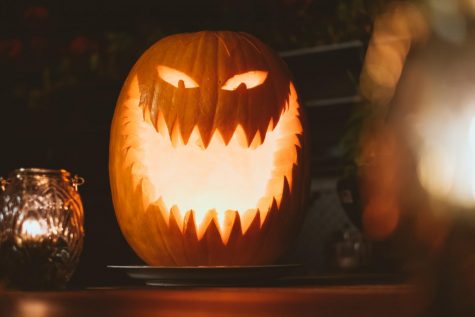 Photo by Benedikt Geyer on Unsplash

There’s nothing better than curling up with your best fuzzy blanket in front of the tv to tune in to your favorite network’s Halloween movie marathon. But by October 5, you’ve seen every Halloween/fall themed movie they plan on airing!

No doubt, there’s definitely some classics playing that need to be watched. Spice up your regular October routine with these new releases:

Of course, it wouldn’t be October without these classics:

‘The number one lesson in covering politics for young journalists’