President Joe Biden’s address to Congress called for massive public investment into the economy — up to $4 trillion to re-build infrastructure and support working families. To pay for his plan, Biden proposed to raise taxes on Americans making more than $400,000 per year.

And, like every president in recent memory, Biden stretched the truth, exaggerated and made vague statements.

FactCheck.org has this round-up.

During his speech, Biden proposed that the traditional 13-year free public school commitment (K-12) to Americans be expanded by four years — two years of pre-K and two years of community college.

“Research shows, when a young child goes to school — not day care — they’re far more likely to graduate from high school and go to college or something after high school,” Biden said. “When you add two years of free community college on top of that, you begin to change the dynamic. We can do that. And we’ll increase Pell Grants and invest in historical Black colleges and universities, tribal colleges, minority serving institutions.”

Biden’s wife, Jill, is a professor at a community college.

The plan for free community college will obviously offset some of the rising costs that students and their parents pay for community college. And if Biden’s infrastructure plan makes it through Congress and becomes law, there should be lots of jobs for which a traditional four-year college education isn’t needed.

What do your peers think about this expansion? Would some feel relieved that there might be jobs that don’t require college or that at least two years of college would be free? How soon might this happen? Are there enough community colleges in your area or state to handle what might be a massive increase in community college enrollment?

This feels like a fundamental re-shaping of our education system. How do your school’s faculty and administration feel about the plans?

Supreme Court justices heard arguments Wednesday in the case B.L. v. Mahanoy, in which a student who was denied a spot on her varsity cheerleading team was booted from her junior varsity squad because she cursed out the school on social media.

And finally, here’s video of the entire two-hour argument from Wednesday.

Student journalists need to be covering this story, primarily as news, but also as opinion, should you choose.

This could be one of the most important cases the U.S. Supreme Court will hear regarding student speech rights since 1988’s Hazelwood v. Kuhlmeier.

In other words, should the Supreme Court later this summer overturn the lower court’s ruling and uphold the school’s right to punish students for off-campus speech, students in public schools, especially, will have to watch what they write about school officials and others no matter the forum, no matter where the speech may take place.

Full disclosure: Quill and Scroll signed on as a “friend of the court” on the side of B.L., the student who was punished for her social media activity. 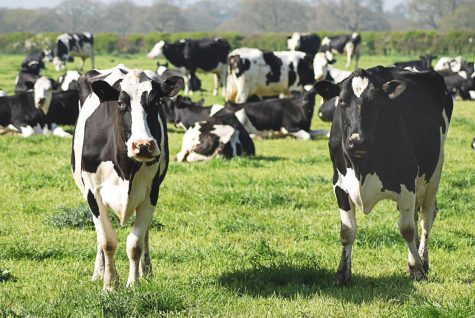 Photo by Monika Kubala via Unsplash

First, it was the “beef ban” that was allegedly a part of the Biden administration’s plan to fight global climate change. Donald Trump Jr. and Texas Gov. Greg Abbott spent much of their weekend tweeting and speaking out against an imaginary issue first “reported” by The Daily Mail, a right-wing news outlet based in the United Kingdom.

Also late last week, the New York Post — which is owned by Rupert Murdoch, whose family also runs Fox News — published a story claiming that the U.S. government was handing out Vice President Kamala Harris’ children’s book “Superheroes Are Everywhere” to unaccompanied minors at the border as part of a “welcome” kit for those children, and as part of a larger plot to indoctrinate the children into loving Democrats.

The proof appeared to be a single picture in which the book was visible on a cot in a detention center.

The reporter quit her job this week, claiming that the Post forced her to write a story that spun the false narrative. The truth? Yes, that was the VP’s book on the bed, but it was just one book, and it was donated to the center by a local humanitarian organization.

Virginia is not rolling back advanced high school math

And, finally, a story first published on Foxnews.com claimed that in the interest of “equity,” the Virginia Department of Education was eliminating advanced match classes in the commonwealth.

Fortunately, the Washington Post followed the story by reporting that Virginia is simply reviewing its math requirements and curricula, and that it definitely will not eliminate advanced classes and force all students in a particular grade to take the same class.

These are just the latest attempts to get people outraged in our ongoing “Culture Wars” in the U.S. Everything in our lives, it seems, has become a political tennis match, with a net separating one set of beliefs from another, and never the twain shall meet, no matter how insignificant or fabricated the claims may be.

And unfortunately, despite both stories having been easily and quickly debunked by ethical media and fact-checkers, too many Americans believe both stories to be true.

Are there misconceptions that students — left, right, center — have about the world that just aren’t true? Can you survey students about what they think they know about hot-button “culture war” issues such as the climate, voting rights, film standards, etc.? And then do you have the time to help de-bunk common misperceptions?

Google Fact Check Explorer can help, as can Checkology by the News Literacy Project.

If so, you’ll provide a great service to your school and your community. And you’ll be doing great journalism.

The Centers for the Disease Control this week announced new guidelines that tell fully vaccinated people that they are safe to gather outdoors in small groups without having to wear masks. However, the CDC still suggests masks outdoors for unvaccinated people and for all people who are gathering in large groups, such as at sporting events.

Well this is new! Wrestling on a football field made possible by a spring wrestling season in Illinois. Geneseo hosting Princeton on Bob Reade Field and the Leafs couldn’t have picked a more perfect day. pic.twitter.com/6hhrDceyfb

The stories here seem to be relatively obvious. What are your school’s and/or school district’s policies regarding outdoor activities and sporting events? Will everyone be allowed to attend? Will football and soccer stadiums be full this fall? Will sports such as wrestling and volleyball be able to compete outside if that’s safer for students and the weather cooperates (meaning it’s not too hot in the South, or too cold in the north)?

The NME is not your enemy!

Jack Kennedy speaks with Sylvia Clubb on THE SOURCE podcast

You have until June 15 to enter your news magazine, newspaper, online news site or multimedia/multi-platform into the prestigious News Media evaluation critique service sponsored by Quill and Scroll. We have a team of professional journalists, journalism professors and skilled former journalism advisers (Hall of Famers, all) ready to provide valuable feedback that your staffs can build on for next year. We GUARANTEE that you will receive your rating and feedback before Sept. 1, 2021.

Here’s a video tutorial that explains the levels of service and how to enter.

Apply now for Quill and Scroll scholarships before applications close

All Quill and Scroll members as well as national winners in our Yearbook Excellence Contest and International Writing, Photo and Multimedia Contest are eligible to apply for our student scholarships.

The Lester G. Benz Scholarship of $500 is available to teachers who:

Applications are due by April 30, 2021. Last year’s winner was Laura Bowe of the King School in Connecticut.

It’s that time of the year when Quill and Scroll chapters should be nudging their advisers to think about honoring seniors and inducting new members — be they sophomores, juniors or seniors — into our international journalism honor society.

We’re able to take and fulfill orders, even as Quill and Scroll staff work from both our home offices and our offices at the Adler Journalism Building on the University of Iowa campus.

We published this update in late 2020. It is still valid and includes a simplified order form (See Video Below) for schools and advisers willing to pay via credit card, and an offer to host an online induction ceremony for your students. The sooner you induct new members, the sooner they’ll be able start planning chapter activities in the spirit of Quill and Scroll. Here’s a link to a PDF file of the Q&S Chapter Handbook if you don’t already have it.

At least for one week, as Chauvin verdict far outpaces Oscar audience

The real-time video audience for the Academy Awards on Sunday night reached just over 10 million viewers, down considerably from the 30 million people who used to watch the show. That’s not good news for the movie industry, or for the awards ceremony market on television.

Just a few days earlier, more than 23 million people watch the verdict in the Derek Chauvin trial. Chauvin was convicted of three crimes in the murder of Derek Floyd last summer.

Is this an indicator that the movie industry isn’t as popular as it used to be? Are students still watching movies? Are the theaters in your community re-opened? Have they closed for good? How will that impact the summer and how teenagers spend their time? There are stories out there.

The Real World of ‘Nomadland’

PBS looks at the story behind the Best Picture Oscar

If you haven’t seen the Best Picture winner from this year’s Academy Awards, you can skip the streaming service and just watch the video below based on the real lives of people who are living as nomads, traveling around North America, living in their cars, vans and RVs, often on less than $10,000 per year — far less than poverty wages in the U.S.

Homelessness is an issue in the U.S. (and other countries), and cities, counties and states are working on ways to alleviate the problems created by so many people (the latest estimates say we have nearly 600,000 people who fit the definition of “homeless”) living on the streets, under overpasses or in a vehicle.

Surely there are stories in your state, even your city or town, of students and families who have experienced or are experiencing homelessness. Tell those stories, and then ask your school and/or district how it accommodates students who are unhoused.

Back in the spotlight

Mary Beth Tinker, her brother John and other Des Moines, Iowa students in 1965 wanted to make a statement about the burgeoning war in Vietnam by wearing black armbands to school. They were preemptively suspended by the school district and then sued the district. The 1969 U.S. Supreme Court ruling on the case established the “Tinker standard,” in which justices agreed that students didn’t shed their First Amendment rights at “the schoolhouse gate.”

In this interview with the education news website the74million, Mary Beth Tinker tells her story and also reveals her thoughts on the B.L. vs. Mahanoy case that the Supreme Court took up this week.