Quill and Scroll’s chapter at Richland High School, Essex, Missouri has earned the Vanessa Shelton Chapter of the Year Award for its journalistic outreach and commitment to Quill and Scroll’s Eight Guiding Principles.

“I’m still learning the ropes. I was blown away, I’ll be perfectly honest. They have over 14,000 chapters throughout the world, and they picked us this year,” adviser Kyle Carter said.

This year, Carter was host for their induction in the theme of a Murder Mystery. They also coupled the induction with their fundraiser for all of Carter’s 15 students to attend this year’s JEA/NSPA convention.

“We do all kinds of community events,” Carter said, with plans for more fundraisers throughout the year to bring all of his students to the Fall National High School Journalism convention, in St. Louis. “They have worked their butts off and they have done it for many, many years.”

Carter and his staff engage with their community and neighboring schools in a variety of different avenues. In the 2019-2020 academic year, they shared photos with 17 other schools during a cross country track meet, partnered with four different local companies for photography events, and participated in many other local events providing its organizers with photos.

Also, they did portraits for veterans nearing the holiday season.

“Every year our yearbook staff does family portraits for our veterans and photos of our elementary students with Santa Claus,” Carter said in his application. “We also did a day-long Santa Claus and Mrs. Claus photo-sets for our local Nissan dealership this year.”

The desire to elevate the school community went beyond student journalism. There was a Beta Better campaign in school, to as Carter puts it, “take a stand in positivity.” There were colorful notes, which adorned the walls of the school, raised up students who had made positive social media posts, and created two wellness rooms — one for students and one for faculty.

The organization also has a strong emphasis on journalistic integrity. From a project conducted every semester with their junior high to ferret out real and fictional news, and then turn it into a legitimate story, to encouraging students to confirm a wide variety of facts for their yearbook, including interviews with alumni, in some cases going back 50 years.

“I’ve never heard of a chapter having a murder-mystery induction,” Lori Keekley, NSPA associate director for Quill and Scroll, said. “This innovative activity — and the others the chapter highlighted in the application — is a great example of how Quill and Scroll chapters are making a difference and helping others in their communities.”

Although The Rebel is led by Carter, a former journalist of 25 years who has been teaching for 10 years, the publication has been a Quill and Scroll chapter since 2015. 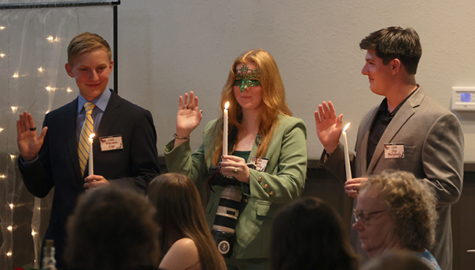