For the 36 countries with the lowest vaccination rates, supply isn’t the only issue

In the United States and other wealthy countries, free COVID vaccinations can be had in any number of places.

That’s not the case in other countries, particularly in Africa and South Asia.

By contrast, many wealthy countries have fully vaccinated more than 80% of their citizens.

The South Africa-based African Alliance says many factors affect vaccination rates in Africa but the biggest is simply that African nations have struggled to get doses.

This interactive map shows the countries where less than 10% of its population is vaccinated.

Here’s a tweet showing the U.S. lagging behind other wealthy countries:

The United States has a lower vaccination rate than any other country tracked besides Russia. https://t.co/86cWoe9o07 pic.twitter.com/GHopSXSXJH

As the COVID-19 pandemic surges on with a new surge from the omicron variant, journalists need to continue to put as much truth into the world to combat all the misinformation that is out there.

Dart Center for Journalism and Trauma put together a list of tips for journalists covering COVID-19 at the state and local level as a reminder that it’s not only a global pandemic, but a community wide crisis.

Here are some of those tips:

Students at several New York City high schools walked out of classes last week. Their hope? Remote learning because they don’t want to walk into unsafe learning conditions in their schools  because COVID cases surged just as a new semester began last week.

Students across some of New York’s most popular high schools walked out shortly before noon on Tuesday.

Organizers claim that hundreds of students participated, and that 400 students walked out at one Brooklyn school.

The students say in-person learning isn’t effective if so many students are missing class that instructors have to constantly re-introduce and explain material, or if teachers miss extended periods of time quarantining.

How do the students at your school feel about the way this new wave of COVID is being handled in the community? Do they feel safe, or what do they think should be changed?

How are you teachers handling disruptions to their teaching? Do they find themselves having to work harder because of large numbers of absences? What are the attendance numbers this year compared to the two previous years, both before and during the pandemic? How many sub days have teachers requested over the same time?

Reporting on science can be difficult and confusing but don’t worry scientists love talking about their work. Ask a lot of questions and even request that they explain things to you in simple terms so you can help your readers understand, no matter their reading level.

When reporting on scientific discoveries or technologies:

Voting and the Filibuster

The U.S. Senate’s filibuster rule requires at least 60 of 100 senators to approve of any bill coming to the entire Senate for a vote. If a bill can’t get a vote, it can’t become law.

Currently, there are two major bills passed by the U.S. House of Representatives that are waiting for the Senate’s vote.

The first is President Biden’s “Build Back Better” infrastructure plan that adds to a bill signed into law late last year. That law provides federal funds for physical projects such as roads and bridges. The new bill supports families through investment in people — child care, job training, and climate initiatives are just a few of the planks in the bill.

The second is the John Lewis Voting Rights Advancement Act, which would reverse some of the restrictive laws passed last year by Republican state legislatures as a response to former President Donald Trump’s lies about the 2020 presidential election.

How has your state legislature reacted to the former President’s lies and his push to make voting more restrictive? What were their concerns? Considering that voter fraud is extremely rare and that Trump’s own attorney general at the time confirmed that the 2020 election was safe and fair, is your state’s reaction logical?

Is your governor, as Florida’s governor is proposing, wanting to establish a special police force to crack down on alleged fraud?

This year, 2022, is another important national election year, and your seniors are turning 18, which makes them eligible to vote. How many are registered? How do teens register in your state? How does anyone vote in your state? Is ID required? How does mail-in voting work?

Answering these and other related questions would be a great service for your readers.

This year’s contest will also see a slight rise in the contest entry price. Entries in most writing, photo and design categories will cost $7, while more detailed categories (Multimedia Features Package, In-Depth Team Reporting, Documentary Film, for example) will cost $15 each.

The deadline for entries is Friday, Feb. 4. All entries must have been published online or in a publication, either school-based or professional. 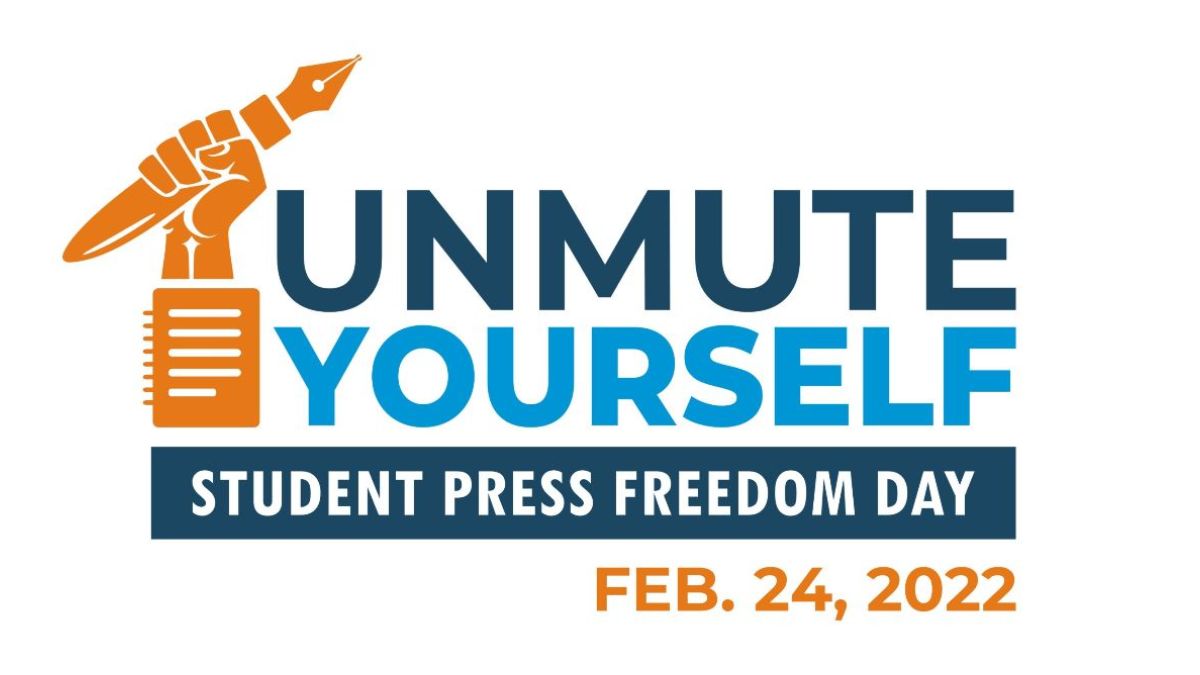 The theme for this years Student Press Freedom Day is ‘Unmute Yourself’.

Student Press Freedom Day is built for students and they want to feature student work on their platforms. By submitting, you will not only have a chance to be recognized in the form of a prize but also by having us feature your work to our national audience. They may share your work even if you don’t win the contest.

You can submit an entry in one or both contest divisions:

Your submission should tell us a story about student journalism. Examples include:

‘Reframed’ revisits Marilyn Monroe’s life and legacy, from an all-women point of view

Iconic sex symbol Marilyn Monroe died in 1962, from an overdose of sleeping pills. This year marks the 60th anniversary of her death, and CNN is premiering a new four-part documentary series, “Reframed: Marilyn Monroe.” CNN claims that the new work is more feminist in its nature than previous works that focused on men’s reactions to Monroe’s appeal.

Underrepresentation hurts everyone. It not only skews how we look at the news, but it affects who goes into the news business later.

All of our newsrooms need to continue to make an effort to diversity our staff and the voices represented on the page.

To the moon and back

Is there another moon outside our own solar system? Scientists say they’ve found another possible lunar world, a moon bigger than Earth orbiting a planet much like Jupiter.

The planet and the purported moon appear to be over 5,000 light years away, according to a report in the journal Nature Astronomy. Scientists call these moons from other solar systems “exomoons.”

Scientific discoveries, as we have discussed, can be so fun but also so difficult to report on. Making sure you are getting the information out as accurately as you can without confusing your readers.

The media possesses the power of agenda setting across the globe, dictating the nature of developments in the society. Usually, the media dictate the development of ideas and innovations by highlighting the benefits of such developments.

As journalists we make way for new discoveries so we need to keep up to date with what scientists are doing.

Prince Harry wants to pay for his own police protection in the United Kingdom, and now he’s going to court over it. Harry filed a claim last week.

Harry wants to bring his children to visit his home country from the U.S., but they need police protection to do so. The prince’s private security team in the U.S. can’t operate fully in the U.K. to protect the prince or his children, Archie and Lilibet.

Harry and his wife Meghan stepped down as working members of the royal family and moved to North America in 2020. They did it to avoid constant hounding by royal-obsessed journalists in the U.K.

A statement from Harry’s attorneys say the family was “compromised due to the absence of police protection” during a July visit to the U.K., when photographers chased Harry’s car as he left a charity event.

This story involves a topics that can be difficult for some readers to understand: law.

Law jargon can be difficult to get around when reporting, so make sure you explain yourself well in your writing. Talk to lawyers and experts who will give you accurate information and be able to clarify what everything means.

The Center for Journalism Ethics at The University of Wisconson-Madison, put together a list of things to keep in mind when reporting on lawsuits.

They say you should dive deep, question everyone, diversify your sources, and to look for trends.

Some sources of information about law for the media include the Criminal Justice Journalists association; fellowships from the Center for Media, Crime and Justice at John Jay College; Crime and Justice News, the newsletter Ted Gest writes each weekday for The Crime Report; the Crime & Justice Research Alliance’s database of experts and research; the Justice Research and Statistics Association’s state-specific data analyses; and research from organizations such as the Dart Center for Journalism and Trauma, the Vera Institute of Justice, the Brennan Center and various research centers.

As we all prepare for Scholastic Journalism Week (Feb. 20-26) and Student Press Freedom Day (Feb. 24), it would be a great time to view “Taking the Lede: Colorado Edition,” a 45-minute documentary I produced with students in the CU News Corps at the University of Colorado. We started in 2015, which was the 25th anniversary of the passage of the Colorado Student Free Expression Law.

The film, which showed on Rocky Mountain PBS in 2016, highlights the value of a New Voices Law that grants student journalists their full First Amendment rights and focuses on the responsibility that comes with those rights.

Here are just a few of the key issues that can be discussed during and after a screening:

As a Quill and Scroll chapter, this film would make a great chapter activity, whether you show it within the journalism classes or even as a movie night for the whole school. The film was awarded a Best of Competition by the Broadcast Education Association in 2016.

Without further ado, I give you “Taking the Lede: Colorado Edition”: