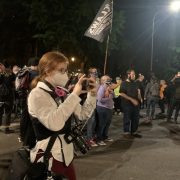 IOWA CITY, Iowa — Eddy Binford-Ross of South Salem High School in Oregon has been named the winner of the 2021 Student Journalist Impact Award by the Journalism Education Association and Quill and Scroll because of her fearless reporting of social justice protests in both Salem and Portland.

Jeff Browne, the executive director of Quill and Scroll made the announcement via video during the virtual National High School Journalism Conference on April 10.

Her adviser at South Salem, Brian Eriksen, wrote of Binford-Ross’s experiences in his nomination letter.

“Stun grenades being lobbed at her. Tear-gassed multiple nights so she couldn’t see straight. Shoved against the wall by police officers. Guns pointed at her by federal officers. This is not what a journalist signs up for when they are placed on an assignment. This is definitely not what a high school journalist is supposed to cover, but Eddy is no regular journalist.”

Binford-Ross began covering the protests in the summer in her hometown, Salem, in part because she wanted to do so for her school newspaper, The Clypian, but also because her local newspaper didn’t have the resources to do so, said Rachel Alexander, the editor of The Salem Reporter.

In her nomination letter, Alexander wrote about Binford-Ross’ coverage of the Dec. 21 attack on the Oregon capitol in Salem by the Proud Boys and other extremist groups. The attackers attempted to break into a special legislative session, and in the process smashed windows and maced police officers.

“The community would know far less about these pivotal events — and the people behind them — without the tireless work of Eddy Binford-Ross,” Alexander wrote. “She’s been fastidious in documenting the protests themselves and keeping track of the people behind them, breaking multiple stories about the arrests of far-right organizers and their travels to Washington, D.C.”

Alexander noted Binford-Ross’ assistance in completing this detailed report for the Reporter, which detailed the experiences of some victims during the assault on the Oregon capitol. 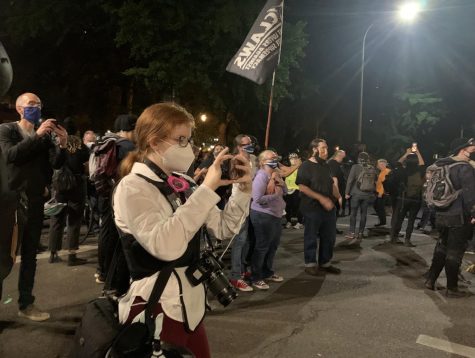 Erinn Harris, who serves as the JEA representative on the award committee, was especially impressed with Binford-Ross’ bravery.

“In this age of New Voices, legislators around the country argue that student journalists are not mature enough to cover stories important and consequential to their communities,” wrote Harris, a journalism teacher and faculty adviser of student media at Thomas Jefferson High School for Science and Technology at Alexandria, Virginia, and the 2020 National High School Journalism Teacher of the Year.

“Eddy Binford-Ross proves them wrong. Her fearless reporting of protests in Portland, Oregon, not only helped inform readers of The Clypian at South Salem High School, but also readers and viewers around the world. Even in the face of great personal risk, Binford-Ross knew that documenting this moment in history was a worthwhile and important endeavor, showing the world the impact of student voice.”

Binford-Ross’ reporting landed her in the national media spotlight even before this recognition by JEA and Quill and Scroll.

First, it was a local story by Oregon Live.

Then it was a profile in The Washington Post.

Next, it was the Nieman Foundation at Harvard.

She was also interviewed by several television journalists, including for the piece below by Vice News.