Applications are now being accepted for the 2022 Quill and Scroll Vanessa Shelton Chapter of the Year Award. The deadline is June 4, and the winner will be announced in early September. The form is just below this announcement.

Over the past 95 years, Quill and Scroll has granted charters to more than 11,000 schools around the world. When a school’s journalism program receives its charter, students in the school begin a Quill and Scroll chapter there. Quill and Scroll does not dictate how active a chapter should be, but the organization’s “Chapter Manual” does provide some guidance on the value of an “active chapter,” the activities it may engage in, and its general goals:

“The chapter can accomplish these goals: (1) inspire members of the staff to greater efforts; (2) attract students of higher ability to publications/media work by offering them journalistic recognition and honors; (3) provide incentive for the development of the journalism department and the improvement of school publications/media; and (4) secure greater recognition of journalism work by students, school officials and the community.” 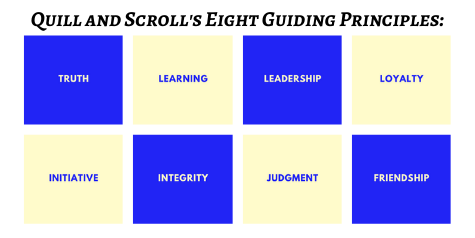 The 2022 Vanessa Shelton Chapter of the Year will receive:

Chapter of the Year Form

Francis Howell North wins because of its outstanding service to journalism, community, and school 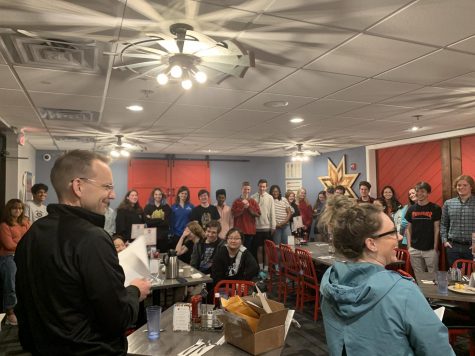 “One of our favorite times of the year is when we get to induct our new members at our induction ceremony in March. At our induction ceremony, we all meet at a local diner, Ginghams to get breakfast before school begins. We eat pancakes, hand out pins, and get to bond with one another before the sun comes up. It’s a special day that merges both of the passions of our chapter – bringing people together and celebrating scholastic journalism.” — Adviser Jordyn Kiel

The Vanessa Shelton Chapter of the Year award is named after Quill and Scroll’s fifth executive director, who served in the position from 2007-2017. Shelton will visit Francis Howell North in the fall to deliver the award to the school, and to speak to the Quill and Scroll chapter. The school will also receive five free memberships in the 2020-21 academic year, and one student will be placed on the national Quill and Scroll Student Advisory Board, which plans national activities.